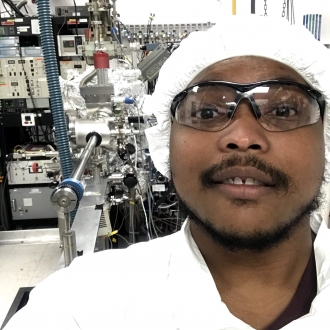 Donez is a rising fifth-year Ph.D. student in Physics at UC Berkeley. He grew up in San Diego, CA, and completed his B.A. in Linguistics and B.S. in Applied Physics from UC Santa Cruz. During undergrad he was a UC LEADS scholar, where he began research in experimental condensed matter physics. He was a visiting Cal NERDS student for his second summer of research, where he worked with Prof. Frances Hellman. After undergrad, he worked for three years as a learning skills advisor for the Academic Excellence Program at UCSC, which fosters a community of incoming students who are typically underrepresented in STEM. He then joined the UC Berkeley Physics department as a graduate student and returned to working in Prof. Hellman’s research group, studying material properties and applications of amorphous oxide thin-films. As a musician for almost twenty years, in his free time he enjoys playing piano and bassoon.

Cal NERDS has given me the opportunity to be part of a community outside of my graduate department. The NERDS team has given me support throughout my graduate career in various ways, including mentorship, participation in NERDS events, and food from CUBE.